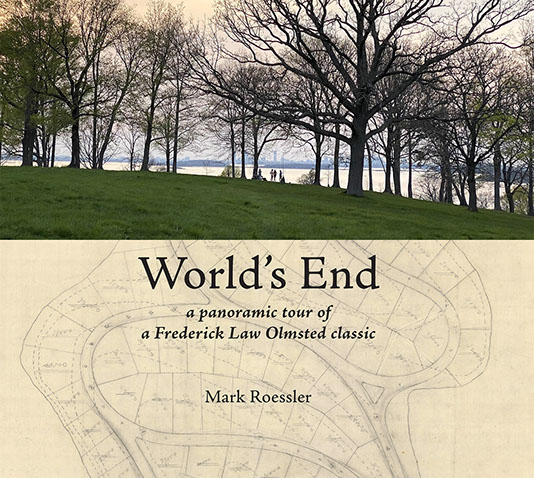 Unless you visit an Olmsted park, it’s difficult to know what it’s like being there. Plans and individual photos only tell you so much. World’s End: a panoramic tour of a Frederick Law Olmsted classic, a new book by Mark Roessler from Levellers Press, aims to solve that dilemma for the property the landscape architect designed on a pair of islands in Boston Bay.

Photographed over four years and during all seasons, the book combines original Olmsted firm drawings, correspondence, maps, and modern photography in a guide to this remarkable property.

Designed initially to be a deluxe housing development in the 1880s, construction never followed. Instead, World's End is a rarity among Olmsted works: a masterpiece left largely unmodified from its original vision. Without the usual buildings, bridges and tunnels created by other architects, it’s instead an example of raw Olmsted vision. If he were a rock musician, this would be his acoustic, solo album.

Frederick Law Olmsted’s world was not unlike ours. The divide between rich and poor had never been greater. Industrialism was polluting the air and rivers. Cities were both exploding and bordering on being uninhabitable. Racism threatened to tear the country apart. Many, including Olmsted, thought democracy itself was under threat.

Gorgeous, engrossing public parks and community spaces were the solution Olmsted offered to these dire circumstances. Far from a place of passive retreat, his landscapes were places where people from all walks of life could gather and enjoy the natural world together.

World’s End: a panoramic tour of a Frederick Law Olmsted classic will delight Olmsted enthusiasts, World’s End fanatics, and  wanderers everywhere. Now, no matter where you are, you can visit this enchanting place.

Over sixty full-color panoramas illustrate every part of the property. Just by turning the pages, you travel through the pathways designed by the Frederick Law Olmsted firm.

Original drawing from the Olmsted firm and maps by the book's author show how the design developed and was finally implemented.

Other panorama books by Mark Roessler

Coming this summer from Levellerspress.com